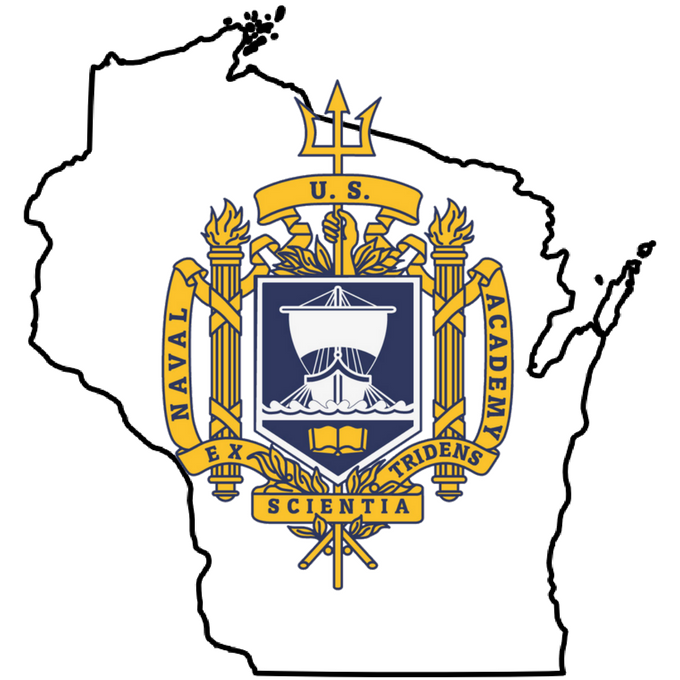 To serve and support the United States, the Naval Service, the Naval Academy and the members:

By communicating the message of the Naval Academy to the area alumni.

By seeking out, informing, encouraging and assisting outstanding, qualified young men and women to pursue careers as officers in the Navy and Marine Corps through the Naval Academy. To additionally interest and guide young men and women who desire a naval career and who give promise of being a credit to the Naval Service.

Initiating and sponsoring activities which will: a) Perpetuate the history, traditions, and memories of the Naval Academy, b) Strengthen the Naval Academy, and c) Bind alumni together in support of the highest ideals of command, citizenship, and government.

Encourage and facilitate: a) Friendships and associations, b) Mentoring and advising relationships, and c) Aid to the members.

Article I – Name and Location

2. The location of this organization shall be headquartered in the greater Milwaukee area of Wisconsin, and shall serve all members located within State boundaries.

1. Regular Member – Any person who has been sworn-in as a Midshipman at the Naval Academy and whose service has not been terminated under other than honorable conditions is eligible for membership in this Chapter. He or she becomes a Regular Member of the Chapter, entitled to one vote and to hold office, upon payment of the annual dues as set by the Board of Directors.

2. Associate Member – Persons who have demonstrated active support of the Naval Service, the Naval Academy, or the Alumni Association may be invited to join the Chapter as Associate Members with non-voting privileges. The number of Associate Members shall not exceed ten percent of the Regular Members. Annual dues will be assessed except for widows or widowers of deceased alumni.

3. Any member may be suspended or expelled from membership in the Chapter for due cause by a vote of the Board of Directors, or may resign upon submission of his/her resignation in writing to the Secretary. The Secretary may submit a resignation to the President.

1. The Officers of the Chapter shall consist of a President, Vice-President (President Elect), Secretary, Treasurer, and up to four At-Large Officers charged with specialized duties/Charters. Current At-Large positions include Flag Mentorship/Cushing Award, Veteran Employment Outreach, Morale Welfare and Recreation (MWR), and Blue and Gold Area Coordinator. They shall be nominated and elected as herein provided. The President shall be elected only when there is no Vice-President to succeed or is otherwise unwilling/unable.

2. The term of office shall normally begin on January 1 and end on December 31 the following year. Voting shall occur during a December Officer’s Call or Army-Navy gathering at which a quorum of active and Board members is present

Article IV – Board of Directors

1. The Board of Directors, hereafter called the Board, shall consist of the Chapter Officers and three other Regular Members.

2. Three of the Board shall constitute a quorum.

1. The President shall preside at all meetings of the Chapter and of the Board and shall exercise the power and the strategic and operational duties usual to that office.

2. The Vice-President shall perform the duties of the President during his/her absence. The Vice President shall also plan and direct Chapter communications executed by the Secretary, to include, but not limited to, Social Media presence and advertisement.

3. The Secretary shall keep a record of the names and addresses of all the members (Regular and Associate) and also record minutes of the meetings of the Chapter and the Board. The Secretary shall also assemble Shipmate Update Articles and submit them on a regular basis for approval and submission by the President or Vice President. Updates shall include activities of Wisconsin Alumni, family, and supporters involved in activities to include, but not limited to Wisconsin Naval Academy Parents Association (WISNAPA), Milwaukee Navy League, Veteran Professionals of Milwaukee, and local NROTC Units (Marquette University and University of Wisconsin, Madison).

4. The Treasurer shall receive and disburse all funds of the Chapter and keep them safe. He or she shall prepare and present for audit a statement of all receipts, expenditures and fund balances as of December 31 or when requested by the Board.

5. Each Officer may have other duties as assigned and authorized by the Board.

6. The Board shall have general charge and control of the activities and properties of the Chapter not otherwise provided for.

7. Other Regular and Associate Members may be appointed as At-Large Officers, chairpersons and members of committees and directors of programs and projects as determined by the President with the approval of the Board.

1. Candidates for the Offices and Board shall be nominated and elected by all Regular Members of the Chapter. The nominations should normally be made in November followed by an election in December, to take office in January.

2. Voting may be by any reasonable means. When more than one person is nominated for any one office, the person receiving the greatest number of votes shall be elected. In case two or more persons receive the same number of votes, the tie shall be decided by lot.

1. Any Regular Member may propose an amendment to the Mission, or to these Bylaws, at any regular meeting. If approved by a majority vote of the Regular Members present and voting, the proposed amendment shall be submitted by the Secretary in writing to all members at least ten days prior to the next regular meeting. If the amendment is then approved by a two-thirds vote of the members present and voting at that meeting, it shall become effective provided the amendment is in accord with the Mission and Bylaws of the national U. S. Naval Academy Alumni Association.

ALL ALUMNI -- To ensure you will receive important emails from the chapter, please keep your profile including your email address up-to-date with the National Association by clicking here.